What is UV Light?

Short wavelength UV light exhibits more quantum properties than its visible and infrared counterparts. Ultraviolet light is broken down into three bands, according to its effects. 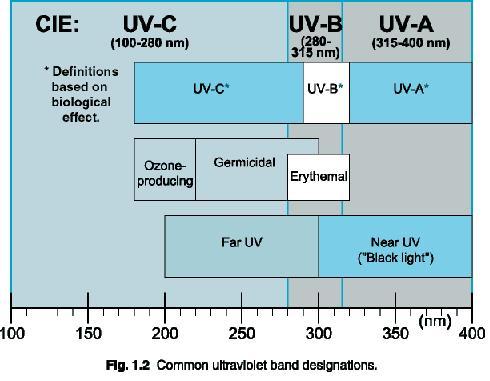 UV-A is the least harmful and most commonly found type of UV light, because it has the least energy. UV-A light is often called black light, and is used for its relative harmlessness and its ability to cause fluorescent materials to emit visible light - thus appearing to glow in the dark. Most phototherapy and tanning booths use UV-A lamps.

UV-B is typically the most destructive form of UV light, because it has enough energy to damage biological tissues, yet not quite enough to be completely absorbed by the atmosphere. UV-B is known to cause skin cancer. Most extraterrestrial UV-B light rays are blocked by the earth’s atmosphere.

Short wavelength UV-C is almost completely absorbed in air within a few hundred meters. Ozone can be produced at certain ranges when UV-C photons collide with oxygen atoms. UV-C is almost never observed in nature, since it is absorbed so quickly. Germicidal UV-C lamps are often used to purify air and water, because of their ability to kill bacteria. Additional information on potential harmful effects of ozone is available on the U.S. Environmental Protection Agency website www.epa.gov.